In December we purchased tickets to The 144th Open Championship in St. Andrews, north of Edinburgh, south of Aberdeen. Those who follow golf know that this year’s event was a history-making one in that rain on Friday delayed several players’ games. They lined up ready to start on Saturday, played for 1/2 an hour, and then play was called off due to high winds.

(I was in one of the tents shopping during the high winds and the roof structure beams were swaying, causing the inner layer of the tent to tear, making dramatic ripping sounds. Others standing in queue with me joked, each of us forcing the other to stand directly under the swaying beam. Ha – ha. It’s all fun and games until someone gets a 40-foot metal beam dropped on his/her head, right?)

But all ended well…for the shoppers. Not so much for the golfers. Saturday play did not resume until 6:00 p.m. so only the Friday holdovers were able to play, no “Saturday play” actually happened on Saturday. So Sunday became the new Saturday. The officiants then announced that the final day of play would occur on Monday. And so history was made: it was only the second time in the history of The Open that play was extended to Monday. And tickets were being sold at only 10 pounds each.

So… Steve managed around his work projects and I excused the kids from Excel Camp and we went back up to St. Andrews. It was… amazing. There was such as “snow day – anything can happen” buzz in the air. Many people who might not normally attend The Open were there, watching it live, on the most exciting day, the final day. I saw a dad who had evidently driven in with his two young children from Glasgow; he could not contain his excitement, chatting with his kids about being there, about what they were seeing and so on. It was lovely. Like a big high-five all around for everyone who was there. And the leaderboard changed with every swing, so observers were shuffling about in small pods from seating areas to standing areas, some following their chosen player, and some abandoning to watch a new fellow who was trending up.

We spent most of that final day sitting at the 17th hole, including the final playoff to break the three-way tie. It was an awesome spot. We moved into the standing crowd nearer the 18th for the final putts, though they were hard to see. The “awe” and then “hoorah” of the crowd following the final putts at the end was electric.

The weather was–duh–heinous (it’s coastal Scotland people). But come prepared we did, with ponchos, boots, rain jackets, umbrellas. It was July and Steve and I were hugging hot lattes and the kids were sipping hot chocolates. We sat in puddles and blinked a lot to see through the rain. Who cares? We were at THE OPEN. We could not mask our gobsmacked childlike expressions: “We’re tourists! We’re from out of town! And we’re sooooo happy to be here!” blabbed our transparent faces.

Re: the title of this post: The Open (‘The British Open’). It’s really “The Open.” But some grew up calling it “The British Open.” The name debate is great fodder for ale-fueled debate–humans will find a good excuse for ale-fueled anything, won’t we? So, no harm no foul. Give it any pet name you wish. Just enjoy the game. 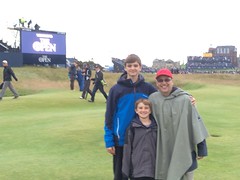 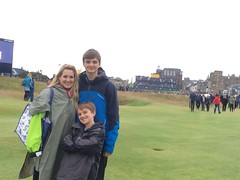 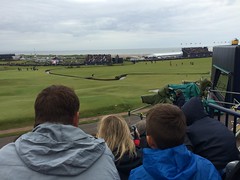 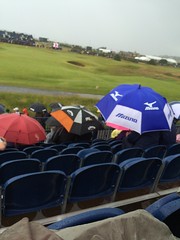 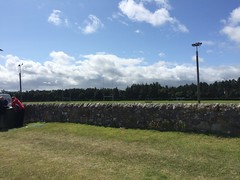 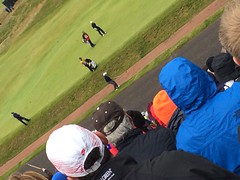 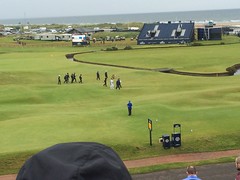 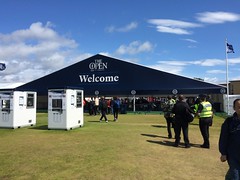 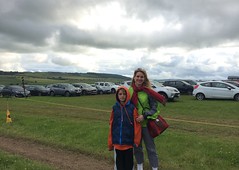 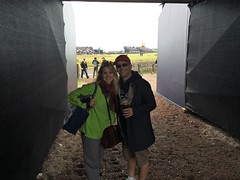 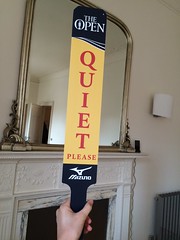 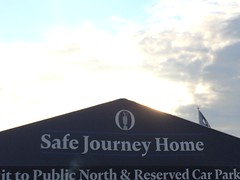 Not much more to say except that it was well worth all the rain-soaked underwear in the world. Cheers!

BizDecoder.com is a collection of straight-talking conversations about the realities of business and your career within.

Everything matters… from understanding what really makes your boss tick so she’ll give you that raise, to having enough self-esteem to step up for the next promotion, to holding your employer to its promises of work-life balance, so you can stop missing your kids’ birthdays, and start winning the long race by protecting your personal life from the voracious appetite of big business.